We’re still here for another 2 days – Just a quick (kind of quick) update on where we’ve been and what we’ve seen so far here in Costa Rica…so much to share and so little time.

We spent our first night in Manuel Antonio (Quepos) and then off to Dominical Costa Rica.

Dominical is this sleepy and VERY rustic little surf town in the south part of Costa Rica (Puntarenas Region) just south of Manuel Antonio, near Uvita. We arrived during their Green Season (better known as the rainy season) as May and June are known as the two months with the most rain. It is a very highly sought-after destination for many ex-pats (from U.S. and Canada) who want to live permanently in Costa Rica. It’s lush and simply beautiful.

We arrived at our Villa and began the fun task of settling in. It was complete ‘outdoor’ living except for the bedroom. For me, that took some getting used to. 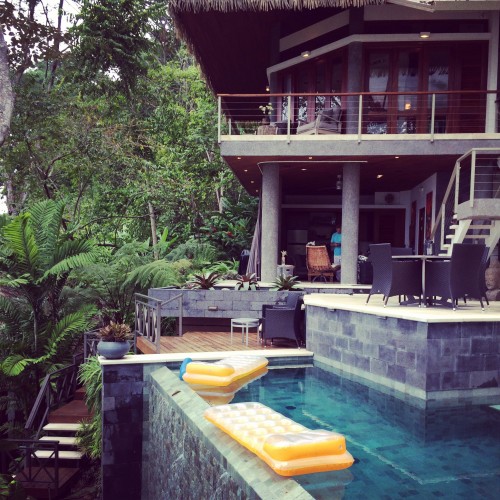 The rainy season also has the MOST humidity – so you immediately MUST go with Mother Nature and settle for the afro or you will forever be battling what to do with your hair amidst the wettest air I have ever encountered. The sun typically would come out for about 3-4 hours a day and the rest of the time it was warm, overcast and/or rainy. Some days we had no rain, other days we had a lot. I must say though that the rain was nothing like I had ever experienced and it was really warm and not full of pollutants like we have back home. We actually didn’t mind getting rained on here as it felt cleansing. It also made this “wet” rain forest gloriously BEAUTIFUL and GREEN – just like Jurassic Park.

At night, there are sounds that are hard to get used to but as you do, they make you laugh. The Tink Frog has this piercing ‘ping’ that sounds like metal on a metal flag pole. It’s so real…and it lasts for up to an hour periodically through the night. There are the iguanas with a knock sound that sounds like they are knocking on your door waiting to come in. They do it once an hour – just loud enough to wake you from a sound sleep. There are more reptiles and birds in this locale than you can shake a stick at and when you arrive, you should be prepared to live with the local inhabitants in this region. It’s nothing like you’ve ever experienced back home.

One morning when I awoke at my normal 5am, I opened the bedroom door to walk down the stairs to the pool area and a silver-coloured frog leapt off the wall and through my massive hair landing in front of me on the step. I totally screamed and flipped out (as expected of me and Ken was in hysterics watching it happen). The night before I was told over dinner, that the majority of the frogs are poisonous (the poison is on their skin) in this region and you don’t want touch them. Yes, freaked out.

There’s a Jesus Christ Iguana (named this as they can ‘walk on water’) that lived behind our fridge and in the morning when I went into the kitchen at 5am, this little dude bolted from behind the fridge running on his back legs – I know he’s taunting me like a cartoon character and having a giggle as I screamed every time that he did this – you’d  think I would’ve been used to it after all that time. He left behind his pile of uneaten dead (large) beetles too for me to clean up.

I love this living…being with beautiful wildlife (the citizens of Costa Rica I call them) and the food is always fresh and so easy to find. All these crazy, delicious fruits and vegetables you could ever dream of, at the farmer’s markets and the Supermarkets.

The produce at the farmer’s markets are simply the best I have ever seen. Ken and I are (healthy) eating like a Queen and King. And the people….the locals are called Ticos, are the kindest most helpful, generous souls I have ever met.

The black sand on the coast of Dominical was so unusual. It was hot to walk on in the middle of the day. This beach was very wide but you had to make sure you checked the tide schedule so that you would not get caught in high tide and not be able to walk back home.

We arrived in Punta Islita and the Nicoya Peninsula on Wednesday, after a 6 (maybe 7) hour drive, to spend the next few days. Costa Rica is a remarkably beautiful country and we had missed it. We were here over 7 years ago and always said we’d go back soon….we never did. I’m so glad we made the time to do it again now.

Even if we did encounter crocodiles along the way. 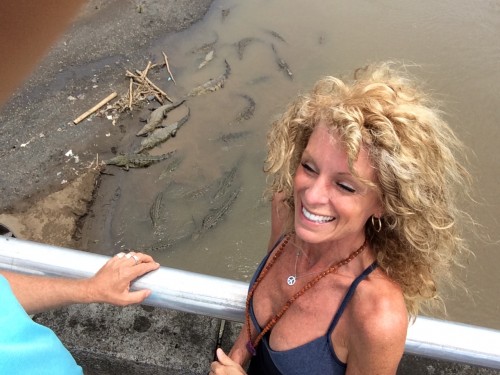 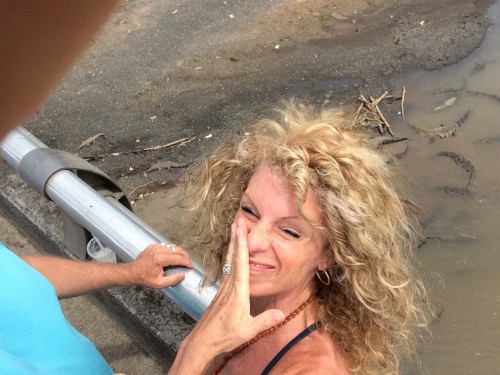 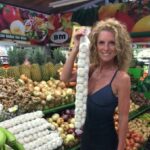 How Our Diets Affect us