You are what you eat.

Kelly Childs believes this to its very core. She is the co-founder and co-owner of Kelly’s Bake Shoppe and co-author of Made With Love cookbook – Kelly is also a vegan chef and co-founder of award-winning restaurant Lettuce Love Café.  Kelly has embodied this proverb since it was taught to her. Kelly has not only passed on this “philosophy” to her brilliant daughter, Erinn Weatherbie, who is also an entrepreneur and a baker, but she has also applied it to her food business — her passion, to be exact — and consequently, on to other people.

Childs has always had a passion for food. She believes deeply that eating well means using good (i.e., organic and good for the planet) ingredients and that you should always keep your health in mind when choosing what to eat. When you eat healthy, you not only look better but also feel better. And introducing a plant-based and gluten-free diet would be one way to go about it. 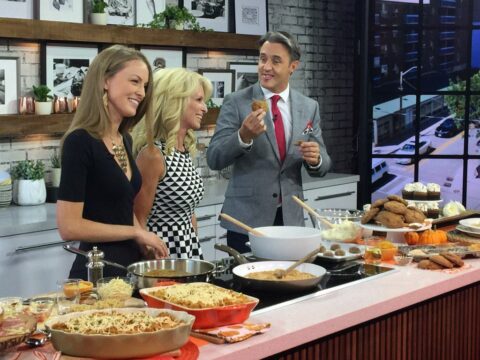 Kelly and Erinn follow a plant-based diet — meaning no dairy, no eggs, no honey, no meat or animal products. The mother and daughter team from Ontario, Canada have been able to share the benefits of choosing a purely plant-based diet, and the exclusion of gluten.

Studies (including one performed by scientists from the University of Toronto) have shown that a plant-based diet can lower cholesterol levels better than a drug treatment. Other research findings reveal that plant-based diets also lower your risk for developing cancer and other diseases such as diabetes and cardiovascular diseases.

In addition to becoming healthier, going vegan can make you lose weight as you grow older and eliminate your risk for obesity. In comparison to a meat-centred diet, a plant-based diet is lower in saturated fat and very high in fibre.

Meanwhile, eliminating gluten from your diet could improve your energy levels, improve your cholesterol levels, and give you better digestive health. A gluten-free diet has been recommended to people who suffer from celiac disease, which is an autoimmune disorder of the small intestine that can become aggravated by gluten. Gluten can damage the intestines, making it hard for vitamins and minerals to be absorbed. This, then, results in other health problems.

The trouble with gluten is that it’s found in many food items: pasta, bread, candies, cookies, pastries, beer — essentially, anything tasty and alluring (of course!). And this is one of the reasons why Kelly’s Bake Shoppe has become so wildly popular with their fans. It is the go-to source for 100 percent, organic, vegan, and gluten-free cookies, brownies, cupcakes, and cakes. The mother and daughter team not only creates some of the healthiest sweet treats in Ontario but also the most decadent and delightfully tasty baked goods any vegan, celiac sufferer, and other people with certain allergies have ever tasted.

Choosing a healthier diet does not have to mean depriving yourself of great tasting food, including desserts. Kelly Childs and daughter Erinn Weatherbie can attest to this —as well as the droves of people who flock to their award-winning bake shoppe.